Developed in conjunction with Ext-Joom.com

In an article originally published by our friends at Leatherhead and District Local History Society, the history of Ashtead Park over the centuries is explored. Learn more about the connection with City of London Freemen's School, Samuel Pepys and 3 Kings entertained in the area.

This article was originally published in the June 2017 edition of the Leatherhead and District Local History Society newsletter, following a presentation by Pat Jenkins in April 2017. We are grateful to them for permission to share the details here.

Who better to tell us the story of Ashtead Park than Pat Jenkins? Originally a pupil at the City of London Freemen's School, then a teacher and author of a history of the school's first 150 years, she is now its archivist, collecting documents, memories and memorabilia from past pupils in two basement rooms.

Started in 1854 as the City of London Freemen's Orphan School in Brixton, the school moved to Ashtead in 1925, dropped the word ‘orphan’ and admitted fee-paying pupils. Mrs Jenkins became friendly with one of the first pupils to arrive there, recalling his exhilaration at travelling on an open-topped bus through the suburbs to the open Surrey countryside.

A fragment of the Tudor manor house survives in St Giles' churchyard wall. Samuel Pepys the diarist visited family connections in the village. In 1680 Sir Robert Howard bought the manor from a distant relative and built a house on a new site with a lake, enclosing the park with a wall and stocking it with deer. Sadly, the boathouse and horse-powered well-house have now gone. So too the great centuries old wych elm which eventually disintegrated. An avenue of wonderful beeches suffered badly in the 1987 great storm.

We saw a 1689 view of the house with many windows and chimneys. Sir Robert entertained three kings there - Charles II, James II and William III - and the iron park gates in Farm Lane were erected in honour of the last. Lady Diana Fielding (formerly Howard), his daughter-in-law, had almshouses for six poor widows built on the Epsom Road. They are still there today.

Richard Bagot married the estate’s heiress and had the new three storey house shown above, designed by Bonomi and built by Samuel Wyatt around 1790. A century later, Sir Thomas Lucas, builder of the Royal Albert Hall in Kensington, added a wing to each side of the house and created an Italian garden with balustrade. A sundial in front of the house is listed by Historic England and pupil's time capsules are buried in the garden.

When Mary Greville Howard died in 1877, the Howard line in Ashtead came to an end. She was loved in the village, having created a new school and extended the almshouses. A memorial to her remains today. The North Lodge was used for a time to educate the best scholars, who acted as unpaid gatekeepers.

The mother of Pantia Ralli, last resident lord of the manor, gave him Ashtead Park as a wedding present. He installed electric lighting and had Teddy Bear Cottage built in the stables for the chauffeur of his eight cars. This now contains school classrooms. The stables are now the 6th Form Block. 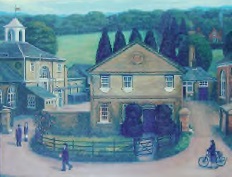 Mrs Jenkins showed us pictures of the game larder, fitted with heavy doors to shield its grisly contents from the gaze of refined visitors, and of the main house's interior, with its ornamental plaster work and columns. The Old Library contained a triangular paper stand brought from the school at Brixton and was once filmed for one of comedian Benny Hill’s shows.

In response to other questions, Mrs Jenkins defined the term ‘foundationers’ as those given free education. She said the school was administered jointly with Christ's Hospital at Horsham and the Boys and Girls Schools still in the City of London. The music department catered for almost every instrument and also had banks of computers that were used for composition of new works.

You can learn more about the work of Leatherhead and District Local History Society on their website. (www.leatherheadhistory.org)